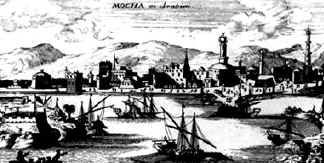 Coffee arrived in Yemen about 500 years ago from Ethiopia and the Red Sea port of Mukha (Mocha) became an important centre for the coffee trade. Today, Yemeni-grown Arabica coffee is considered one of the best in the world.

The land where coffee began
A traveller's notes

Qishr is a type of spiced coffee drunk in Yemen. It is made from the husks of coffee beans with the addition of ginger (sometimes cinnamon) and sugar. It is popular in Yemen because the husks are less expensive than the beans themselves. The Lavazza website has a recipe for qishr using coffee husks. In places where husks are not available ground coffee can be used instead, but it doesn't taste quite the same (recipes here and here).

A Different Kind of Coffee
By Jerry Baldwin, The Atlantic, 1 September 2009

There's more than one way to make tea – and how you make it depends on which part of the country you're in. (Yemen Times, 1 Mar 1999)

Alcohol was sold openly in southern Yemen during the British occupation and, later, under Marxist rule. The famous Seera beer was produced by the National Brewing Company in Aden - the only legal brewery in the whole of the Arabian peninsula.

Following the unification of north and south Yemen in 1990, the brewery began to attract the attention of strict Muslims and there was talk of closing it during Ramadan or turning it over to full-time vinegar production. The brewery was destroyed by northern troops entering Aden at the end of the 1994 war and has not been rebuilt.

The spread of beer, wine and liquor in Yemen
By Hakim Almasmari (Yemen Times, 23 January 2006).

Here are some websites that have collections of Yemeni recipes: