Music and poetry in Yemen

"The pre-eminence of poetry in Yemeni culture cannot be overstated, and its importance to music is illustrated by the story of an accomplished lute player from Baghdad, who visited the Yemen some years ago.

"He was invited to attend a gathering at the house of a well-known amateur poet and musician in Sana’a where he performed, as was his custom, a highly technical and brilliantly executed lute solo lasting nearly an hour.

"When the music stopped, there was a pregnant pause in the room. The guests, who had sat patiently chewing qat throughout, waited expectantly. The Iraqi, it seemed, had finished! To a Yemeni, such an instrumental piece, however interesting, was merely a prelude to sung poetry, without which the performance was simply incomplete."

Peaks of Yemen I Summon: Poetry as Cultural Practice in a North Yemeni Tribe
By Steven Caton, reviewed by Najwa Adra. Yemen Update No. 48 (2006)

Stations of Bewilderment
A poem by Ahmad al-'Awadi, translated by Lucine Taminian. Yemen Update No. 47 (2005) 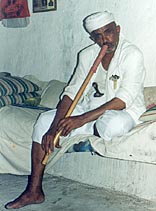 Al-Khallool: the oldest musical instrument in Yemen
The metre-long khallool may look like a cudgel or a walking stick, but actually it's a flute. It is played in the Tihama area and has probably changed little during the last 500 years. There are just two holes - at the far end of the instrument. Yemen Times,17 May 1999

Ahmad Fathi
Born in Hodeidah in the 1950s, Ahmad Fathi (above) became one of Yemen's most famous musicians, noted for his creativity and brilliance in playing the lute. Yemen Times, 15 Feb 1999.