Dance styles in the Middle East

Dance of the Seven Veils
A European invention (shira.net)

The Omani dance of death
Fann al-dan is an ancient dance perfomed following a death. Article by Nasser Al-Taee

Life stories of female entertainers
by Karin Van Nieuwkerk (extracts from A Trade Like Any Other - Female Singers and Dancers in Egypt, 1995)

"Raqs Sharqi" (literally: "oriental dance") is the name used in the Middle East. The term "Belly Dance" is said to have been coined in the United States to attract people to an exhibit called "The Streets of Cairo" at the Chicago World's Fair in 1893.

What is belly dance?

A brief history of oriental dance
From social dance to performance art. By Salome (orientaldancer.net)

ShiraNet
The art of Middle Eastern dance - lots of information

A line dance for both men and women. The national folk dance of Lebanon, also found in Syria, Jordan and Palestine.

The Dabke – an Arabic folk dance

The Origin of the Lebanese Dabke
World Lebanese Cultural Union

In his book, “An Account of the Manners and Customs of the Modern Egyptians”, the 19th century British orientalist Edward Lane gave a disapproving description of the female dancers known as Ghawazee:

"The Ghawazee perform, unveiled, in the public streets, even to amuse the rabble. Their dancing has little of elegance; its chief peculiarity being a very rapid vibrating motion of the hips, from side to side.

"They are never admitted into a respectable hareem, but are not unfrequently hired to entertain a party of men in the house of some rake. In this case, as might be expected, their performances are yet more lascivious than those which I have already mentioned ... I need scarcely add that these women are the most abandoned of the courtesans of Egypt." 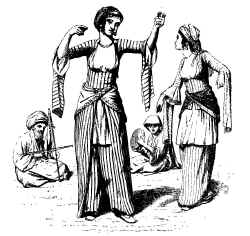 The Ghawazee of Egypt
By Jasmin Jahal

Guedra: the FAQ
By Karol Harding

Originally from Libya, hagallah is performed by the bedouin of western Egypt. It has been described as a wedding dance and also as a girl's coming-of-age dance.

A "candle dance" traditionally performed in Egypt during weddings. The name comes from the candelabra worn on the head.

A dance performed to drive away evil spirits. It originated in the Sudan but is also popular among women in Egypt.

The mysterious zar
by Arabella