The Birth of Modern Yemen - Introduction 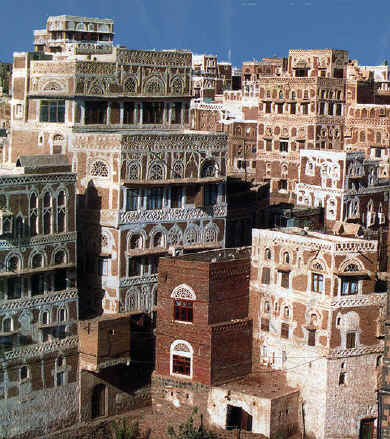 An e-book by Brian Whitaker exploring the unification of north and south Yemen in 1990, and its aftermath

IT IS MORE than just coincidence that at the time when Communism was collapsing, the two Germanies were re-uniting and new democracies were being born in Eastern Europe, two states at the southern tip of the Arabian peninsula embarked on a sweeping transformation of their own, simultaneously unifying and democratising. North and south Yemen had long been a distant outpost of the Cold War, and reverberations from the upheaval in Europe had an impact there, too.

The united Republic of Yemen established in May 1990 was a marriage between what, at first glance, seemed unlikely partners. The north, though theoretically in the “capitalist” camp, was one of the world’s poorest countries; a highly traditional Arab-Islamic society, with a strong element of tribalism. The south, on the other hand, partly secularised and partly de-tribalised, had taken the Marxist route. Even poorer than the north, it was one of the Soviet Union’s largest debtors. In some respects the move towards multi-party democracy in Yemen was even more surprising, given the history and inclinations of the two newly-unified states.

Inevitably, such radical changes to Yemen’s constitutional and political structure proved far from straightforward, occurring as they did against a background of continuing rivalry between the former regimes of north and south, and in a country where state institutions were often ill-equipped to resist the competing demands of powerful social and political forces. Despite persistent talk of unification long before 1990, these difficulties had led more than a few seasoned observers of Yemeni affairs to believe that it would never happen. When it did, many predicted that unification would fail – and, indeed, their pessimism was not entirely misplaced. A two-month armed conflict four years after unification almost tore the country apart again.

Democratisation, meanwhile, was greeted by Yemenis with much initial enthusiasm. In the space of a few months, press freedom and the general openness of political debate reached unprecedented levels. The 1993 parliamentary elections, contested by more than 20 parties, were the first to be held under universal suffrage in the Arabian peninsula. Gradually, however, optimism faded as the limitations of instant democracy became apparent. Since 1993, a succession of parliamentary, presidential and local government elections has not delivered the peaceful rotation of power that is the hallmark of established democracies and President Ali Abdullah Salih’s ruling party, the General People’s Congress, has further consolidated its hegemony over the political scene.

THIS BOOK, originally intended as a PhD thesis for Westminster University, was mostly written in the second half of the 1990s but never quite completed. I had to set it aside because of other commitments – regretfully, since I felt it contained a wealth of little-known information about a crucial period in Yemen’s recent history. I continued to be nagged by the thought that I should make it more widely available and finally, in 2009, having in the meantime spent seven years as the Guardian’s Middle East editor and completed two other books, I decided to revise and update it, and publish it online as an e-book.

My initial purpose, back in the 1990s, was to examine the simultaneous processes of unification and democratisation in Yemen, and the relationship between them. Why, for instance, did they occur at the same time, and was one essential to the other? Though the two were intimately connected, their relationship was complex. As one Yemeni journalist put it, “Unity brought democracy and democracy did not bring unity.” While it is certainly true that unification could not have proceeded as it did without democratisation, it is also true that democracy, at least in the form practised in Yemen, impeded full-scale integration of the two states for a while, and that subsequent progress towards a fully-fledged democracy has been impeded at times by the demands of national unity.

This fluctuating and often unpredictable relationship between national unity and democracy has implications which stretch far beyond Yemen. Numerous other countries are confronted with issues of national unity – Canada, Spain, and the United Kingdom are among the more stable ones – and a common response is to look to an extension of democracy, for example through devolution, as a way of resolving them. The results, though, are not always positive. India may be one case where democracy has helped to maintain national unity but in others, such as the former states of Czechoslovakia and Yugoslavia, democratisation was accompanied by fragmentation. The Yemeni experience may also hold lessons for north and south Korea, should they ever attempt to unify.

Today, with the benefit of hindsight and in the light of subsequent events (notably in Iraq and Afghanistan, together with confused and bludgeoning efforts by the United States under President George W Bush to promote democracy more generally in the Middle East), Yemen’s democratic experiment raises further questions. As in Iraq and Afghanistan, it was an attempt to create instant democracy from above – mainly by establishing a system of electoral politics but without most of the other machinery and institutions that are needed if democracy is to flourish.

Among other things, democracy requires a state. As Linz and Stepan* put it: “Democracy is a form of governance of a modern state. Thus, without a state, no modern democracy is possible.” Democratisation is rarely a simple matter of replacing a non-democratic system with a democratic one. In Linz and Stepan’s view, a country’s degree of “stateness” (or lack of it) is an important factor in determining how readily it will be able to democratise. Yemen’s problem in this respect was that the government in Sana’a exercised only minimal control over large parts of the country while the state, as a single source of supreme power, continued to face challenges from a variety of quarters. The Yemeni state, in other words, was – and to a considerable extent still is – inadequate for the role that democracy required of it.

In the light of this, the events described here – unification, democratisation, armed conflict and its aftermath – may also be considered in the broader context of state-building. That, in turn, raises further questions about the emerging state and its relationship with Yemeni society, in particular: what kind of state should it be? A more highly-developed state can certainly provide better conditions for democracy to flourish but, equally, such a state can help to entrench authoritarian rule. In Yemen, as in many of the Arab countries, it is often difficult to distinguish between “the state” and its leadership, between state-building for its own sake and state-building which is intended mainly to consolidate the power of a ruling elite.

Yemen is not the easiest of countries to write about. Although I followed the events of 1990-94 as closely as I could at the time or researched them shortly afterwards, it is sometimes difficult to be sure what really happened. Yemenis themselves often give conflicting accounts, as well as having differences of opinion about their interpretation. In trying to build up a coherent picture I have had to make judgements based on the available facts and the balance of probabilities, also taking into account the likely motivation of sources and background knowledge about “the way things work” in Yemen. In short, it’s an attempt to get as close as I could to the truth of the matter in circumstances where the truth can be rather elusive. One of the advantages of publishing online, however, is that it does not have quite the same finality as print. Readers who wish to dispute anything, correct errors or make general comments are welcome to contact me. My email address is: brian@al-bab.com.

The Birth of Modern Yemen