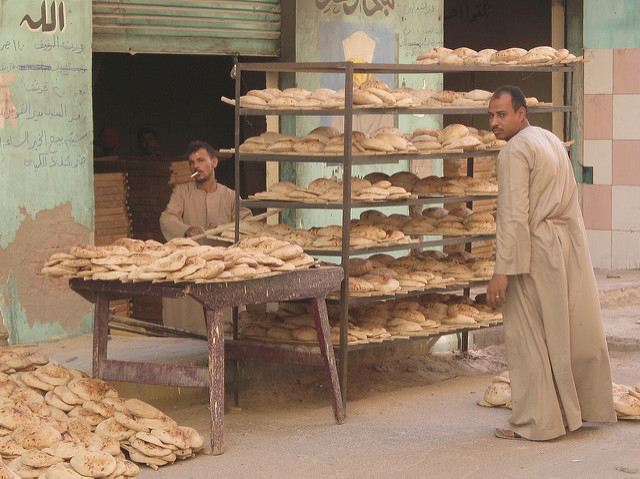 Arab cuisine mostly follows one of three culinary traditions – from the Maghreb, the Levant  or the Gulf.

In the Arab countries generally, lamb and chicken are the most popular types of meat, though goat, beef and occasionally camel meat are consumed too. Muslims usually avoid eating pork.

In comparison with western cuisine, Arab cuisine tends to make more use of lentils, chickpeas and numerous types of bean. Use of olives, aubergines, courgettes and okra is also more common.

Raw pickled vegetables are often served on a side dish. These may include chillis, gherkins, and slices of turnip, cucumber, carrot, etc.

Common nuts are almonds, peanuts, pine nuts, pistachios, and walnuts. Nuts may be included in main dishes as well as sweets and desserts.

Bread in the Arab countries is usually round and flat, though its size and thickness can vary a lot. Most countries have their own typical styles for everyday consumption.

Bread is a staple of most meals and in some situations is used in place of a spoon or fork for scooping up food.

Some types of bread are unleavened; others are made with yeast. A tasty example of unleavened bread is the Yemeni malawah and here is a recipe for a Moroccan yeast bread, or khoubz.

Needless to say, bread in the Arab countries is usually baked in ovens  (which can often be seen glowing red in the back of Arab bakers' shops) but it may also be baked by laying a very thin sheet of dough on to a heated (usually domed) surface.

A third and more interesting method is sand baking – a traditional technique in desert areas using the remains of a camp fire. The glowing embers are scraped away and a shallow hollow is made where the fire has been. The dough is placed in the hollow then covered with sand and the embers until it is baked.

Baharat is an all-purpose seasoning which contains black pepper plus, typically, cumin, cinnamon, and cloves. It may also contain coriander, cardamom, nutmeg and/or paprika.

Ra's el hanout (literally, "top of the shop") is a general-purpose spice mixture used for savoury dishes in North Africa. By tradition it contains 12 different spices. The combination varies from one maker to another but it is almost certain to include paprika, cumin, chili and cinnamon.

Za'atar is a widely-used condiment throughout the Middle East. It is a mixture of dried herbs – marjoram, thyme, oregano, etc – plus sesame seeds, sumac and salt. Again, there are differences of opinion about the best combination of ingredients and their proportions. Za'atar can be used in general cooking – for example, rubbed over a chicken before roasting – and sprinkled on bread dough before baking (man'ousheh in Lebanon). It can also be consumed without cooking, by dipping pieces of bread into olive oil and then into za'atar.

Harissa is a hot chili paste particularly associated with Tunisia, Libya and Algeria. It is also available dry, as a spice mix. 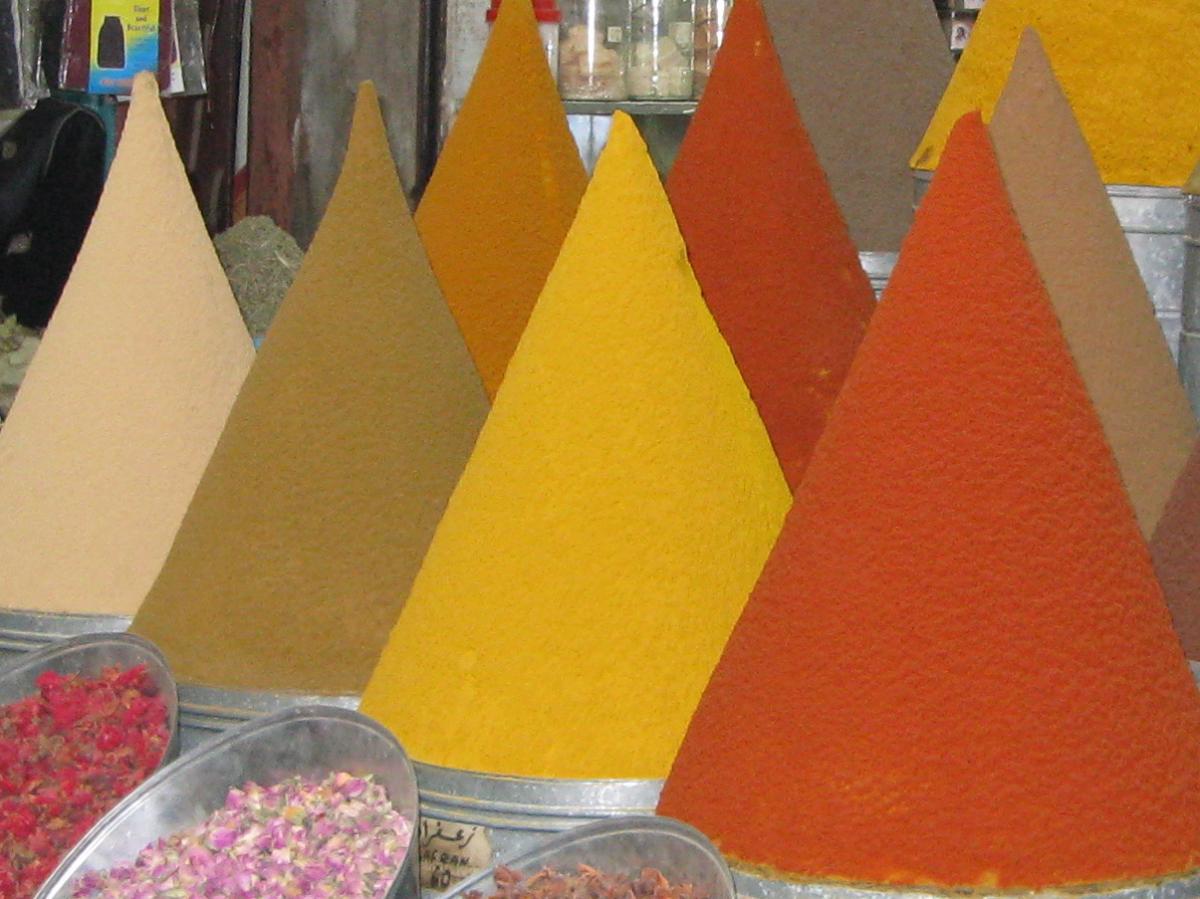 Kunafa (kanafeh / kunafah) has a crusty top made from noodle-like shreds of pastry, with a filling of soft white cheese. The whole dish is steeped in sugary syrup with a hint of rosewater is often decorated with a sprinkling of chopped pistachio nuts. Kunafa is usually baked as a single piece on a large metal tray and then cut into slices. There are several variants, however, and it may also be found in the form of small, individual rolls. Here is a short video demonstrating how to make kunafa.

Basbousa is a very sweet and sticky cake made with semolina, and sometimes with the addition of coconut. It is usually topped with almonds. In Lebanon it is also known as namoura and in Tunisia as qalb el-lawz ("heart of the almond").

Baklawa comes in a variety of shapes and styles, cut into tiny pieces because it is very rich and sweet. The basic ingredients are filo pastry, chopped nuts and honey or sugar syrup. It is thought to have been introduced to the Arab countries by the Ottomans.

Mahalabia is a milk pudding, typically flavoured with cardamom and rosewater. It is served cold.

Umm Ali ("the other of Ali") is richer than mahalabia and is served hot. Crumbled pieces of pre-baked filo pastry are mixed with hot milk, cream, sugar, raisins, chopped nuts and sometimes coconut. It is then browned under a grill. Recipe here. 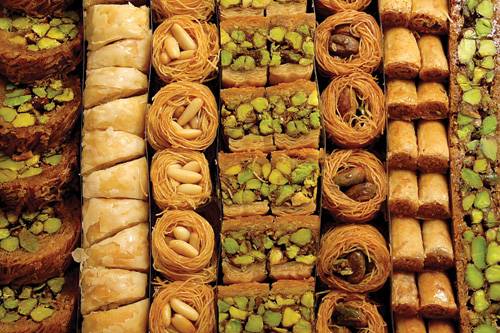 Observant Muslims distinguish between food which is halal(permitted and haram (forbidden). The basic rule is set out in Verse 2:173 of the Qur'an which forbids consuming carrion, blood, "the flesh of swine" and meat from any animal which has not been slaughtered in the name of Allah (by uttering a short prayer as the animal's throat is cut).

Fish is considered halal, though some Muslims avoid certain types of seafood such as shellfish and crustaceans. Discussions can also be found on Islamic websites about the permissibility (or not) of eating other types of creature, such as crocodiles, snakes and frogs.

In 1997 the UN's Food and Agriculture Organisation issued general guidelines about which kinds of food can be labelled as "halal", though it noted that there are differences of opinion among religious scholars.

During the holy month of Ramadan, Muslims are expected to refrain from eating, drinking and smoking between sunrise and sunset. The evening meal that breaks the fast – known as iftar – is regarded as a special social or family occasion. Certain foods and dishes are traditionally associated with Ramadan and iftar, though these vary from country to country. One example is the sweet known as qatayef.

Here are some general collections of online recipes from around the region:

Vegetarian Soups from the Middle East
by Habeeb Salloum

Recipes for food and cuisine from Egypt
(touregypt.net)

The Iraqi Family Cookbook
A blog with more than 150 recipes

In my Iraqi Kitchen
A blog by Nawal Nasrallah about Iraqi food and its history, with recipes.

Libyan food
A large collection of recipes, with photographs

The Libyan Kitchen
A blog with recipes

A recipe for maqluba
by Clifford Wright

A recipe for musakhan
by Clifford Wright

Kitchen of Palestine
A large collection of recipes