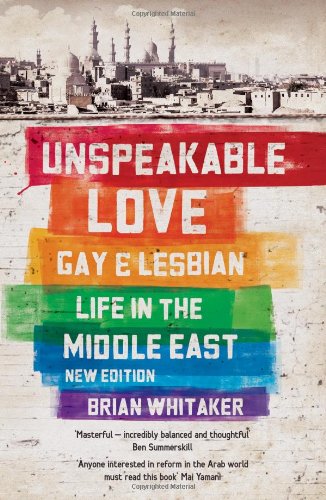 Unspeakable Love: Gay and lesbian life in the Middle East

Available from amazon.com or amazon.co.uk

Homosexuality is still a taboo subject in the Arab world. While clerics denounce it as a heinous sin, newspapers, reluctant to address it directly, talk cryptically of ‘shameful acts’ and ‘deviant behaviour’.

Amid the calls for reform in the Middle East, homosexuality is one issue that almost everyone would prefer to ignore. In this absorbing account, Guardian journalist Brian Whitaker calls attention to the voices of men and women struggling with gay identities in societies where they are marginalised and persecuted by the authorities. He paints a disturbing picture of people who live secretive, often fearful lives; of daughters and sons beaten and ostracised by their families or sent to be ‘cured’ by psychiatrists.

Deeply informed and engagingly written, Unspeakable Love reveals that, while repressive prejudices and stereotypes still govern much thinking about homosexuality, there are pockets of change and tolerance. This updated edition includes new material covering developments since the book's first publication.

Brian Whitaker, a former Middle East editor of the Guardian, is also the author of What's Really Wrong with the Middle East, The Birth of Modern Yemen (e-book), and Arabs Without God.

"It is high time this issue was brought out of the closet once and for all, and afforded a frank and honest discussion. Brian Whitaker's humane, sophisticated, and deeply rewarding book, Unspeakable Love, does exactly that."
Ali al-Ahmed, Saudi reform advocate and director of the Gulf Institute, Washington

“This book is a compelling read. It captures with detail and with disturbing accuracy the difficulties and dangers facing lesbians and gay men across the Middle East. It helps us to understand the social pressure, the sense of isolation, the anxiety and fear and trauma. And through it all we glimpse also the possibility of hope, of remarkable courage, and perhaps even in the longer term the chance of a more open and accepting society.”
Chris Smith, former Arts Minister in the British government

"This is an important, timely book, and lucid to boot – a must-read for anyone who believes in human rights."
Rabih Alameddine, author of 'Koolaids'

"Brian Whitaker has given us a moving analysis of the hidden lives of Arab homosexuals. This genuinely groundbreaking investigation reveals a side of Arab and Muslim culture shrouded by the strictest taboos. Arab societies can no longer contain their cultural, religious, ethnic or sexual diversity within their traditional patriarchal definitions of the public sphere. Anyone interested in reform in the Arab world must read this book."
Mai Yamani, Research Fellow at Chatham House and author of 'Cradle of Islam'

"The book boldly delves into one of the biggest taboos in modern Muslim societies with subtlety and sensitivity, addressing both Arab reformers and interested Western readers. [It] provides fascinating insights into the lives of ordinary gays and lesbians, and how society views and treats them."
Khaled Diab, Toronto Globe and Mail

"I learnt much from Brian Whitaker's book, which is excellent. It was inspirational to me on the challenges to international law, and the uses of nationalism to suppress dissent within countries."
Fred Halliday, Professor of International Relations, London School of Economics

"While directing readers toward the pinpoint of light at the end of the tunnel, Whitaker clearly demarcates tradition and family honour as two powerhouses eternally keeping Middle Eastern alternative lifestyles in the dark. ... Strong, condensed, world-weary portrait infused with hope."
Kirkus Reviews

"An illuminating book on an important topic."
Publishers Weekly

"Never before has such a comprehensive study of gay civil rights been published."
The Middle East Gay Journal

"Boldly delves into one of the biggest taboos in modern Muslim societies with subtlety and sensitivity."
Globe and Mail

"A remarkable example of what ill-informed journalism can produce when inspired by social Darwinism and racialised Eurocentrism."
Joseph Massad, Columbia University

Note: al-bab receives commission from Amazon for book purchases made using links on this site.