Oman: the sultan and his prisoners 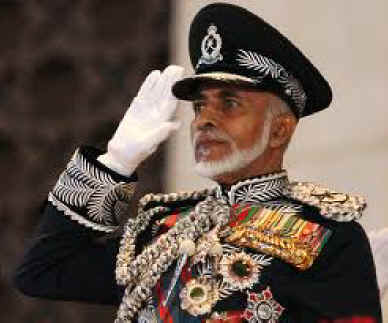 With the killing of Colonel Gaddafi in 2011, Sultan Qaboos of Oman inherited the mantle of the Middle East's longest-surviving despot.

Qaboos – described by the US State Department as "a longtime friend of the United States and a valued partner who's made enormous changes on the ground in his country" – seized the throne from his father (with British help) way back in 1970.

He has always had close ties with Britain, having once served in the British army. Last December he delighted the recession-hit British government by agreeing to purchase $4 billion-worth of military aircraft that he probably doesn't need.

It's not surprising, therefore, that the sultan gets an easy ride from western governments in terms of the way he treats his own people.

Last week, 20 human rights organisations from various Arab countries issued a joint call for the release of Omani activists who have been jailed for exercising their right to free expression and assembly. Similar calls came from Human Rights Watch andAmnesty International.

Last year, 35 activists were sentenced to between six months and 18 months in prison on charges that included "defaming the Sultan", "illegal gathering" and violating Oman’s cybercrimes law through posts on Facebook and Twitter.

On 9 February, 17 of these prisoners began a hunger strike in protest at a Supreme Court delay in hearing some of their appeals. They have since been joined by others, bringing the total of hunger strikers to at least 31, according to Amnesty International.

An "urgent action" note from Amnesty explains the background:

The crackdown began on 31 May 2012, with the arrest of three activists who tried to travel to Fohoud oil field, approximately 250km south-west of Muscat, to document an oil workers’ strike that had started a week earlier. The three – lawyer Yaqoub al-Kharousi and activists Habeeba al-Hina’i and Ismail al-Muqbali from the newly formed Omani Group for Human Rights – were reportedly charged in connection with inciting a protest.

In June several dozen more writers and activists were arrested – at least 22 people were detained on 11 June alone after protesting peacefully outside Muscat’s police headquarters, where they were calling for the three arrested on 31 May to be set free.

On 5 December the Muscat Appeal Court upheld convictions against five men and a woman for insulting the Sultan and using the internet to publish defamatory material. Abdullah al-Abdali, Bassam Abu Qasida, Hilal al-Busa’idi, Issa al-Mas’udi, and Muhammad al-Kiyumi received sentences of a year in prison and a fine of 1,000 riyals (around US$2,600) each. The woman, Maymouna al-Badi, left the court with a sentence of 20 days’ imprisonment.

On 12 December the Muscat Appeal Court upheld the Court of First Instance’s convictions of 11 men and one woman for insulting the Sultan and using the internet to publish defamatory material. Ten of the men – Abdullah al-Arimi, Abdullah al-Siyabi, Ali al-Muqbali, Hamad al-Kharousi, Mahmoud al-Rawahi, Mohamed al-Badi, Mohamed al-Habsi, Nabhan al-Hanashi, Rashed al-Badi, and Taleb al-Ebri – and the woman, Mona Harden, were sentenced to a year in prison and a fine of 200 to 1,000 riyals (around US$520 to US$2,600), while the 12th defendant, Hamoud al-Rashidi, received a suspended six-month prison sentence.

Verdicts against 11 other activists, nine men and two women, who had been sentenced to six months in prison and a fine of 200 riyals for unlawful gathering, were also upheld by the Appeal Court on 12 December. The 11 activists are Abdullah al-Ghilani, Badr al-Jaberi, Basimah al-Rajihi, Basma al-Kiyumi, Khaled al-Nawfali, Mahmoud al-Jamoudi, Mahmoud al-Rawahi, Mohamed al-Fazari, Mukhtar al-Hina’i, Nasser al-Ghilani and Sa’eed al-Hashimi.

On 16 January 2013, the Muscat Appeal Court upheld the sentences against seven activists for insulting the Sultan and violating Oman’s internet laws of between 12 to18 months’ imprisonment and a fine of 1,000 riyals. The seven include Usama al-Tawayyah, Ahmed al-Mu’ammari, Awadh al-Sawafi, Mukhtar al-Hina’i, Mohammed al-Jamoudi, Ismail al-Muqbali and Hassan Raqishi. Mohammed al-Jamoudi and Mukhtar al-Hina’i were already serving sentences that were upheld on 12 December. In addition, Ishaq al-Aghbari and Ali al-Hajji in the same case had their sentences reduced to three and six months’ respectively.

Meanwhile, the sultan has continued his "reforms" by
replacing six members of the government-run National Human Rights Commission.