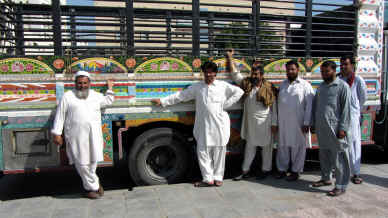 Employment systems in the Arab Gulf states are increasingly coming under an international spotlight.

Following the decision to hold the 2022 World Cup in Qatar, concerns have been raised about the conditions of migrant construction workers preparing for the tournament – an issue that was discussed recently in the European Parliament.

Meanwhile, Saudi Arabia has expelled hundreds of thousands of foreign workers in an effort to provide more jobs for its own citizens, and organisations that include Human Rights Watch, the International Trade Union Confederation, Amnesty International, and the International Labour Organisation have been calling for abolition or reform of the iniquitous kafala (sponsorship) system used throughout the Gulf for employing foreigners.

This is the first in a series of blog posts exploring the problem.

Part one: How it began

Part two: The iniquities of kafala

Part four: Working outside the rules

From the 1950s onwards, these countries experienced rapid development, largely as a result of oil, and to facilitate that development their ruling elites made a conscious decision to rely on short-term immigrant labour. This seemed a logical choice at the time since it would have taken far too long to educate and train their own local workforce, which in any case was very small.

In concept this was very similar to the German Gastarbeiter ("guest worker") policy of the 1960s and early 1970s. Foreign workers arriving in the Gulf were not viewed as immigrants but as a temporary, rotating source of labour that could be drafted in rapidly during an economic boom and dispensed with during a downturn.

In the Gulf states, however, the idea of non-citizen workers as guests rather than immigrants was taken more literally than it was in Germany – at least in the beginning. It had echoes in ancient tribal traditions of hospitality towards strangers, granting them shelter, food and protection, and this led to the start of what became known as the kafala ("sponsorship") system.

The Arabic word for a sponsor is kafil which can mean "protector" but also has connotations of vouching for someone or taking responsibility for them. Thus foreign workers arriving in the country would do so under the auspices of an individual citizen or a company belonging in the country. Non-citizen workers would sign a fixed-term (but usually renewable) contract with their sponsor-employer who then assumed financial and legal responsibility for them, and on the basis of that the authorities would grant them an entry visa and residence permit.

One effect of this was that although the kafala system was government-supervised, the burden of enforcing it lay mainly with the sponsors, which opened the door to a variety of abuses and corrupt practices. Most importantly, from the workers' point of view, it tied their continuing residence in the country to continuing employment with their sponsor, making them vulnerable to exploitation.

Although kafala was meant as a short-term solution to the Gulf states' development problems, it has proved anything but short-term. In the UAE (the only GCC state to publish figures for duration of stay), almost a third of the migrant workers have been there for more than 10 years and several hundred thousand have stayed more than 20 years. Most leave earlier but, since they are usually replaced by other migrants, the presence of vast numbers of non-citizen workers has become a more or less permanent feature of the Arab Gulf states.

One factor in this is the dependence effect: Gulf states now depend on foreign workers to keep their economies running, while countries providing the labour have also come to depend on the remittances they provide. Another factor is what Philip Martin refers to as the distortion effect: if employers know that cheap foreign labour is readily available they will embark on projects that make use of it. A prime example in the Gulf states is showcase construction projects which could never be contemplated, let alone completed, by relying on the indigenous workforce.

Dependence and distortion help to explain why "temporary" foreign labour tends to become permanent wherever in the world it is used. In the case of the Gulf countries, though, there is a very important additional factor: racial segmentation of the labour market where citizens tend to be employed by the state and non-citizens work in the private sector.

Martin Baldwin-Edwards explains the history of this:

"Throughout the Middle East and Northern Africa region, there is a problematic legacy of state intervention in the economy dating back to the 1950s and 1960s: after nationalisation of major assets and direct control of economic production, the public sector emerged as the primary locus of employment.

"Even today, the public sector is the desired employer owing to high wages, job security, social allowances and generous retirement benefits. Furthermore, the public sector has shorter working hours than the private sector – allowing civil servants to run other 'businesses' on the side – and promotion within it is based on seniority more than performance. By the early 2000s, over 60% of the national labour forces were employed in the public sector in the GCC (excluding Bahrain and Saudi Arabia)."

Baldwin-Edwards adds that the situation is even more extreme in Kuwait and the UAE which have small working-age populations that rely almost exclusively on government jobs.

Meanwhile, the abundant supply of foreign labour from poorer countries keeps private sector wages down. That, coupled with the hard, dangerous and dirty types of work often done by migrants has led to the widespread idea that some kinds of job are intrinsically unsuitable for Gulf citizens.

Because foreign workers in the Gulf states are not officially regarded as immigrants, since their presence is supposedly temporary, there has been no effort to integrate them – and one result of this is that they have very few rights. (Germany tried a similar approach with its Gastarbeiter programme but eventually had to abandon it.)

It is not simply that Gulf states have neglected the integration question. According to Hélène Thiollet, a specialist in migration studies, Saudi Arabia actively pursues anti-integration policies. Segregation of foreigners in labour camps and compounds is one of the strategies used by the government, companies, as well as by the foreigners themselves.

Other tools for segregation, she told the Saudi Gazette, are differentiating access to socioeconomic rights, such as education and health, and "hierarchical wages within companies for people with similar education" based on their nationality.

Noora Lori, in a paper for the French Institute of International Relations (IFRI), notes:

"While temporary guest workers in the United States and Europe managed to leverage the long duration of their stay to gradually gain legal access to permanent residency, family reunification, and citizenship, this transition is not happening in the Gulf."

She argues that this happened in the US and Europe not because governments were particularly welcoming but because government policies were challenged in the courts, and through the efforts of trade unions and civil rights groups. Given the authoritarian nature of the Gulf states – the lack of an independent judiciary, the suppression of trade unions and NGOs, etc – it is scarcely surprising that policies have not faced similar challenges there.

The Gulf states are gradually realising that their employment systems are in a mess. Getting rid of foreign workers is not an option – at least, not if they want to maintain their current standard of living – so what can they do about it? Future blog posts will look in more detail about the nature of the problem, and possible solutions.