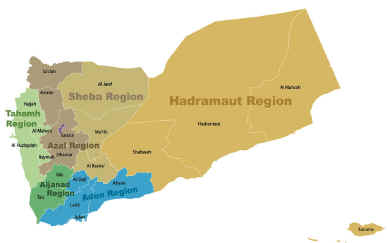 The year 1990 marked what many Yemenis hoped would be the start of a new era when the northern and southern states – relics of British and Turkish imperialism – merged into one.

The British had taken Aden as a colony in 1839 and then extended their authority in the southern and eastern hinterland. A decade later, Ottoman forces began their conquest of the north which led, in 1871, to the installation of an Ottoman governor in Sanaa.

The north’s long struggle against Turkish rule began in 1891 and finally succeeded in 1918 when the Ottoman Empire collapsed; thereafter north Yemen was ruled by imams – religious leaders with monarchical power – until the republican revolution of 1962. British rule in the south continued until 1967 and was quickly followed by the establishment of the Arab world’s first (and last) communist regime.

Unification of the northern Yemen Arab Republic and the southern People's Democratic Republic of Yemen had been discussed for years without much progress and it came about in 1990 largely because of a political and economic crisis in the south.

The southern Marxist rulers were especially worried about the decline of communism in eastern Europe and feared that if nothing was done they would soon meet the same fate as the Ceausescu regime in Romania. To avoid that, they embarked on an ill-fated marriage with the northern regime of Ali Abdullah Saleh.

When I first visited Yemen in 1991, T-shirts on sale in Sanaa hailed the new era with a slogan saying "United States of Yemen". But it was not to last. The southern leaders soon had second thoughts and in 1994 fought a brief war of secession – which they lost. President Saleh reimposed unity by force and his subsequent treatment of the south left simmering resentment which eventually led to a revival of separatist activism.

Now, almost a quarter of a century after unification, the phrase "United States of Yemen" is back, but in a different context. I heard it used by a Yemeni the other day, in connection with the decision to create a federal system with six regions.

Let us hope that the 2014 version of the "United States of Yemen" proves more successful than the 1990 version, though it's not going to be easy.

The Yemen Socialist Party, which formerly ruled the People's Democratic Republic, is far from happy about the new arrangements. It had been seeking a two-region federation (north and south) but many Yemenis viewed that as a revival of the old divide and a possible stepping stone to secession. As a compromise, the south will now have two federal regions and the more populous north four.

Although multiple tiers of government (local, regional and national) are a good idea in principle, in Yemen's case federalism seems to be more about damping-down separatist tendencies than promoting good governance. It could also further weaken a central government which has never been able to establish its authority over the entire country.

Yemenis are naturally wary of central government. During the Saleh years there were plenty of reasons for opposing it, criticising it and wanting it to have less power. But that's because it was bad, not because it was central.

Yemen cannot move forward without a strong and effective central government to address key problems at a national level. The danger in the new federalism is that continuing arguments about its structure and functions, and competing regional claims over scarce resources, will simply become a time-wasting diversion.

To prevent that, Yemen needs a government in Sanaa with the authority to arbitrate between regions and capable of imposing its will if necessary, in ways that Yemenis can recognise as just and fair.

One example of the need for strong national government is Yemen's looming water crisis. Although not at the forefront of current debates, water scarcity is arguably the country’s number one problem, Helen Lackner writes in a book published this month. She continues:

"Without effective water governance and management ... Yemen’s long-term perspective is one of worsening poverty, and therefore of further deterioration of security and safety. Sooner rather than later, this is likely to lead to civil strife on an unprecedented scale ...

"The state must retain final authority over water management and enforce decisions that protect the interests of all Yemenis, rather than bowing to political pressure from powerful interest groups."