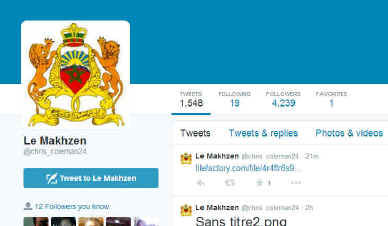 For several weeks now, a Twitter account known as Le Makhzen or @chris_coleman24 has been posting what appear to be leaks from the Moroccan foreign ministry’s email traffic.

This has mostly gone unnoticed outside Morocco, perhaps because the leaks have so far revealed little that was not already known, or at least suspected. But the latest batch of documents, posted yesterday, does shed some interesting light on the Moroccan government’s public relations and lobbying activities in the United States.

One email, dated 18 April 2011, is from Jordan Paul, executive director of the Washington-based Moroccan American Center for Policy (MAPC). It concerns a letter – apparently critical of Morocco’s human rights practices – which had been organised by Congressman Frank Wolf, signed by 12 members of Congress, and sent to Hillary Clinton who was then secretary of state.

In response to that, MAPC organised a second congressional letter to Clinton putting Morocco’s human rights practices in a much more positive light. One of the objectives, according to the email was to obtain more signatures than Wolf’s letter. The email points out that Congress was not in session, but it was still possible to obtain 18 signatures – six more than Wolf’s letter. It adds: “The quality of our signatories is very much higher than Wolf’s.”

The email also shows that the text of the letter was submitted to the Moroccan embassy in Washington – presumably for approval – before it was released. The following day, details of the letter were posted on PR Newswire in a report which began:

“A bipartisan group of 18 U.S. Congressional leaders led by Rep. Mario Diaz-Balart (R-FL) and Rep. Bennie Thompson (D-MS) hailed Morocco's continuing efforts and ‘constant commitment to human rights protections’, calling on the US to address ‘human rights concerns in the Polisario camps’ in southern Algeria. In a letter to US Secretary of State Hillary Rodham Clinton, the Members cited Morocco's ‘real human rights progress’, including the creation of a new ‘wholly independent human rights institution’."

Records filed with the US Department of Justice under the Foreign Agents Registration Act show that around this time Morocco was spending at a rate of more than $3m a year on lobbying and PR in the United States. Over a six-month period, the Moroccan government made the following payments:

By far the largest recipient of Moroccan lobbying and PR money was MAPC which, together with two other Morocco-linked organisations, runs a website called Morocco on the Move “to promote relations and mutual understanding between the United States and Morocco”.

The second-largest recipient was The Gabriel Company, whose president and chief executive is Edward Gabriel, a former US ambassador to Morocco. Gabriel, who was copied-in on the email about the congressional letter, has also been involved in media firefighting on Morocco’s behalf.

For example, in 2009, when the Carnegie Endowment published an article about the US position regarding Morocco and Western Sahara, Gabriel weighed in with a reply. A note at the end of his article explained that he is a former US ambassador to Morocco who “currently advises the Moroccan government”.

Another leaked email from April 2011 concerns Britain’s policy on Morocco and Western Sahara. It appears from the correspondence that Morocco suspected some kind of pro-Polisario influence within the British government and wanted to know more about how British policy was shaped.

This resulted in a report by Caitlin Dearing, who is described as Senior Vice President of Research, Projects, and Programs at MAPC. Caitlin submitted her report to MAPC and Edward Gabriel. MAPC appears to have passed it to the Moroccan embassy who then passed it to the foreign ministry in Rabat.

Fortunately for Caitlin, she didn’t have to go far to do her research. She interviewed her fiancé (named in the report as “Cameron”) and his unnamed sister who was working in the British delegation at the UN.

It is unclear what triggered the report, but shortly before it was written Prince Charles had paid an official visit to Morocco – a visit which had resulted in some unflattering coverage of the country in the British media. A headline in The Telegraph, for example, said: “Prince of Wales lays wreath at Moroccan tyrant's tomb”, and an article for the Guardian by the director of War on Want called for Morocco to pull out of Western Sahara.

Arab countries tend to assume that such articles in western media are government-inspired, since that is what often happens in their own countries. If that is what the Moroccans believed, Caitlin was able to reassure them that the British press was simply doing what it normally does and that if Polisario moles existed in Whitehall they were unlikely to be having much influence on policy. Rather ironically, she also pointed out that lobbyists generally have less money and influence in Britain than in the US.

Here is her report, as presented in the email:

I spoke with Cameron, who was privy to my conversations with his sister regarding UK/UN, and wanted to share some further thoughts/clarifications on UK Foreign Policy and the decision making process. Basically, foreign policy comes out of both Whitehall (Civil Service/Foreign Office) and 10 Downing (PM/Cabinet). Whitehall civil servants will develop several policy options that they will then present to the foreign secretary who will decide on what policy option to take. He may or may not consult the PM depending on the issue/precedents for the issue, however he is likely in lock-step with the PM. This is especially the case with [William] Hague and Cameron, as Hague is a former party leader and loyalist, rather than an expert with a serious background in foreign policy. Hague also likes to be presented with a few, simple options from Whitehall according to a recent news article (Cameron is still looking for this).

As for the relationship with the UN, based on conversations with Cameron's sister, who is a first secretary, the staff there merely implements and manages the policy. The only person who may be able to provide more insight on the WS [Western Sahara] decision-making is the Ambassador to the UN himself, who is also the only person who may possibly have any say on the policy. While civil servants present the options, they are generally inline with overall policy. I apologize that this does not speak specifically to the point of how Sahara policy is guided, but I am afraid I am unable to ascertain any more information than Cameron's sister has already shared with me, given that she only knows so much.

There are two other important things to remember about UK Foreign Policy (as Cameron pointed out – we view things from an American perspective!). First, members of the Cabinet are all elected MPs and then appointed, so they have a bit of a different mandate than our appointed cabinet members. Second, lobbying there [in the UK] does not work as it does here [in the US]. While there are certainly interest groups, they do not have nearly the amount of money or influence that US groups have – there is no equivalent to K Street. So while there may be strong pro-Polisario advocates, it is unlikely that they wield undo [sic] influence, if any at all. It is also possible that there are pro-Polisario civil servants who are helping direct a policy, but the UK stance also makes sense in light of its foreign policy priorities. And I have no indication that the first secretary in charge of the Sahara dossier has pro-Polisario feelings, otherwise I think I would have heard about it. Instead, Cameron's sister just laughs when I ask about anything!

With regard to the human rights decisions at the UN and the general issues we have had with UK papers, below you will find an article that sheds some light on UK foreign policy that has certain relevance to our issue. Cameron seems to think that this has nothing at all to do with the British being pro-Polisario, but rather their insistence on human rights standards and their belief that Morocco can actually reform, as opposed to the other countries in the region. He suggested taking a look at how the UK press judges Jordan to see if there is bias or if there is just a stronger insistence on human rights, democracy, etc. He also thought it wise to point out that UK papers tend to just be more negative in general, of only to be seen as more objective (which I think many people would agree they are). As for the fact that the papers are generally very pessimistic about Morocco, well they are Brits after all ......

Cameron said that he would be more than happy to share anything else that he has gained from conversations with his sister, from reading UK papers, or from being a Brit with interests in foreign policy more generally, but he seems to think that quite a bit of this could be gained from a few comparisons/searches of the UK Press.

Let me know if you have any other thoughts or concerns.