A European politician who has been banned from public office because of electoral malpractice was involved in monitoring the 2014 presidential election in Egypt.

Lizin is currently honorary president of the Belgian senate but the criminal offence relates to her time as mayor in the historic town of Huy. (For background, see my earlier blog post.)

Lizin is also closely involved with the Global Network for Rights and Development (GNRD), where she holds the grand title "High Commissioner for Europe".

Last year GNRD was part of a "joint mission" to monitor the presidential election which legitimised General Sisi's seizure of power. The mission produced an enthusiastic report. It said:

"The Egyptian people have experienced a unique process toward democratic transition, and despite the fact that minor errors and inaccuracies occurred, these do not shed a negative light on the overall results of the electoral process".

"The Joint Mission was honoured to be a part of the 2014 Egyptian Presidential Election and contribute to promoting its transparency, integrity, and success. The Joint Mission expresses its hope that these contributions will support Egypt’s development and a smooth transition to democracy. We wish success to Egypt, being one of the most influential countries in the Middle East, and commend their achievements thus far towards a path to democracy."

Through her involvement with GNRD, "High Commissioner" Lizin played a senior role in the monitoring mission. She can be seen here (on the right) in a picture posted on her website: 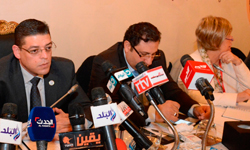 She also appears in a YouTube video of a conference where the mission reported its findings. At 5min 52 sec into the video, she complains that Europe has been hesitating "to support Egypt":

"I am coming from the centre of Europe – Brussels – and Europe was hesitating to support Egypt. But we must say our mission, and especially GNRD, will never hesitate. We have said from the beginning we should be present to observe elections and to say election is part of democracy."

GNRD's efforts seem to have found favour in Egypt. Last January it was named by the Supreme Electoral Commission as one of only five international organisations that will be allowed to monitor Egypt's forthcoming (but recently postponed) parliamentary elections.

Lizin's electoral malpractice case was not something that popped up unexpectedly last week. Before Thursday's appeal hearing it had been dragging on for several years and had been reported in the Belgian press. If GNRD knew about it, why did they allow her to join the monitoring mission in Egypt, since that risk damaging its credibility?Or perhaps GNRD didn't know. Perhaps they appointed Lizin as their High Commissioner for Europe without looking carefully into her background. If so, it doesn't say much for GNRD's ability to spot malpractice in Egyptian elections either.