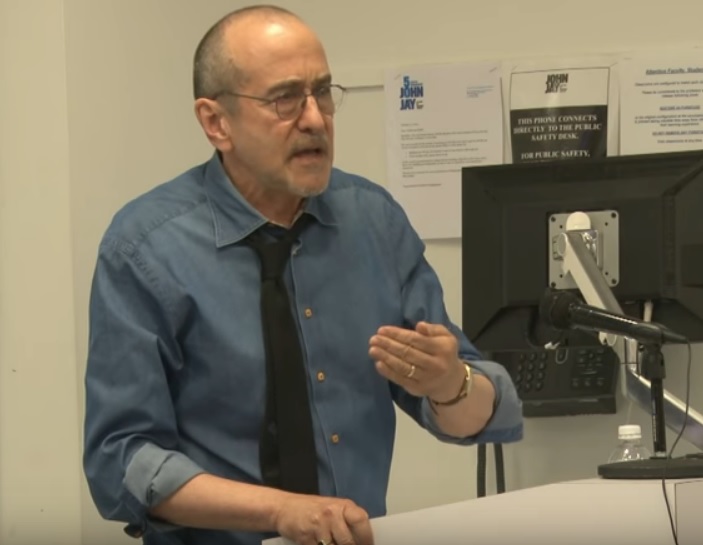 A group of university professors who claim to be engaged in "rigorous academic analysis" of propaganda during the Syrian conflict have recruited a 9/11 truther to their team.

Mark Crispin Miller, professor of media studies at New York University, rejects what he calls "the official narrative" of al-Qaeda's 2001 attacks on the United States, describing it as "preposterous" and "ludicrous". He also claims that "the meme" of barrel bomb attacks in Syria has been thoroughly debunked.

Miller recently joined the advisory board of the "Working Group on Syria, Propaganda and Media", a group of professors and other academics who, according to their website, have come together to study media reporting of the war and "the role that propaganda has played in terms of shaping perceptions of the conflict".

Along with another professor in the group, Miller has also become a director of a British-registered company called Organisation for Propaganda Studies.

At first sight the Working Group on Syria, Propaganda and Media looks like a genuine – even worthwhile – research project. It talks of producing conference papers and articles and providing "reliable, informed and timely analysis for journalists, publics and policymakers".

On closer examination, though, the Working Group on Syria, Propaganda and Media seems to be not so much countering propaganda as generating it (see previous blog posts here, here and here).

Previously published articles by members of the group cast doubt on their claims of "rigorous academic analysis". They dispute almost all mainstream narratives of the Syrian conflict, especially regarding the use of chemical weapons and the role of the White Helmets search-and-rescue organisation. Several of the group also make frequent appearances on the Russian propaganda channels, RT and Sputnik.

In his professorial role, Miller teaches a course on "Mass Persuasion and Propaganda" and, as might be expected, encourages critical thought among his students. He urges them to view media with caution and to reflect on what is not reported in the news as well as what is.

But Miller's own fears of mass deception – especially by mainstream media and the US government – have led him to reject what many regard as established fact.

In 2016 he was master of ceremonies at a conference in New York marking the anniversary of the 9/11 attacks. According to its organisers the purpose was to assess "ongoing efforts to expose the truth and obtain justice for the attacks that killed nearly 3,000 innocent victims and that continue to serve as the pretext for the Global War on Terrorism".

In his opening remarks Miller told the audience: "We frankly don't believe the government's conspiracy theory of how that happened ... The official narrative is preposterous. On its face it is a ludicrous explanation. We don't accept it." (See video below at 4 min 19 sec.)

A few months later, Miller spoke at a conference of American leftists on propaganda and "US regime change in Syria". He began by recalling events of a century earlier and "the catastrophic success of the allied propaganda drive that brought the United States into World War One".

The British people and then the Americans, he said, had been"bowled over" by reports of Germans impaling babies on bayonets and cutting the breasts off Red Cross nurses. There was even the story of a Canadian soldier who had allegedly been crucified by Germans.

"This was the first time that a state had ever used resources of mass suasion, of propaganda, to get an entire population to support a war that they ordinarily wouldn't have supported," he said.

Miller went on to draw parallels between propaganda of the First World War and contemporary reporting of the conflict in Syria.

"I don't have to list for you examples of similar atrocity campaigns that we have read about in the western press – Aleppo, various chemical gas attacks, the crematorium –you know, Buchenwald, Auschwitz, right in the middle of Damascus burning up the bodies of all these Syrians ...

"From reading the New York Times or any of its affiliates in the US press, or from watching CNN or MSNBC or listening to NPR you wouldn't know, for example, that the barrel bombs meme was meticulously demolished by Robert Parry of Consortium News ..."

At this, he was loudly interrupted by an angry voice from the audience – the voice of John Davenport, professor of philosophy at Fordham University, who asked: "Are you denying the Assad regime has dropped barrel bombs on its people?"

One person impressed by Miller's performance was Professor Piers Robinson who teaches media studies at Sheffield University in Britain and is now a leading figure in the Working Group on Syria, Propaganda and Media. Robinson posted several tweets saying what a "great talk" it was.

Miller's advisory role with the working group was first made public on March 7 in an update on its website but he already had a formal connection with Robinson which had been established several months earlier. Robinson and Miller are both directors of "Organisation for Propaganda Studies", a Sheffield-based non-profit company which was registered last November. The company has two other directors: Professor David Miller from the University of Bath and Professor Christopher Simpson from the American University in Washington.

The Organisation for Propaganda Studies (OPS) also has a website which is registered in the name of Sheffield University. The website is mostly blank but its "about" page does give some information regarding its plans:

"In addition to research and analysis, OPS activities will include academic conferences and workshops, research funding bids, and the production and dissemination of high quality academic papers and monographs as well as the blog posts, articles in the media and professional outlets.

"The OPS also seeks to develop relations with communication practitioners such as journalists, media professionals, educators, and other stakeholders to facilitate dissemination of research-based knowledge and the reform of professional and ethical practice.

"The OPS website will provide an essential ‘go to’ resource on propaganda, suitable for researchers, practitioners, teachers and the general public, and include links to scholarly publications, projects, and media engagement activities."

It adds that OPS "actively seeks income via donations and consultancy fees as well as research council and other research funding".

Another page on the website lists members of OPS's advisory board. Readers may recognise some of the names: