Houthi fighters pull back in Yemen but government suspects trickery 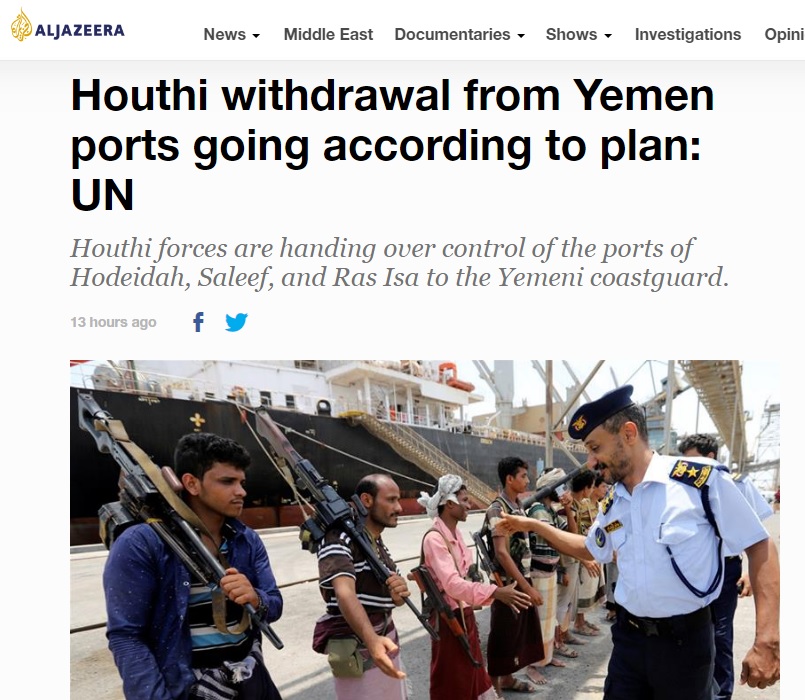 Yemen's Houthi rebels began pulling back their forces from three key ports at the weekend in what the UN hopes will start a gradual de-escalation of the conflict and improve the flow of humanitarian aid. However, the ousted Yemeni government – which is backed by a Saudi-led military coalition – has dismissed the move as "a flagrant show".

De-militarising the Red Sea ports of Hodeida, Salif and Ras Issa formed part of an agreement reached in Stockholm last December which is only now starting to implemented. The plan was for the Houthis to pull back five kilometres from the ports initially, and for coalition forces on the fringes of Hodeidah city to pull back by one kilometre. At a later stage, both sides were to move 18 km from the city, with heavy weapons to be moved 30 km away.

On Sunday the UN issued a statement saying the first day of redeployment had gone "in accordance with established plans". It continued:

"All three ports were monitored simultaneously by United Nations teams as the military forces left the posts and the Coast Guard took over responsibility for security. In the following days, activities are expected to focus on removal of military manifestations and de-mining."

It added that "formal verification" of this first stage of the redeployment will take place on Tuesday. 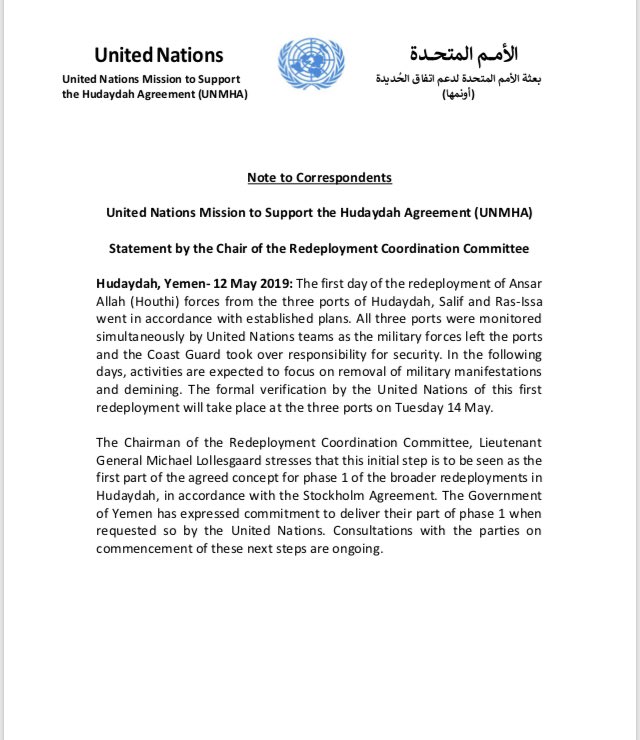 So far, there has been no redeployment by forces supporting the internationally-recognised government of Abd Rabbu Mansour Hadi. The government is clearly suspicious about the Houthis' intentions, so the UN will need to convince it that the Houthis have really left the three ports.

According to the UN statement, the government has "expressed commitment" to fulfil its side of the bargain when the UN asks it to do so, but it's unlikely the de-escalation will proceed further unless/until the government's fears have been allayed.

It's unclear whether either side really wants this process to succeed but the government's wariness is not without foundation.

News photos on Sunday (see above) showed Houthi fighters in Salif port apparently handing over to men in Yemeni coast guard uniform but the question raised by the government is whether these "coast guards" are Houthi supporters in disguise.

This suspicion is based on earlier incidents described by Peter Salisbury in an article for the International Crisis Group:

"On 29 December, after an abortive UN attempt to get the parties to temporarily reopen the Sanaa-Hodeidah road as part of a confidence-building measure, the Houthis unilaterally announced their redeployment from Red Sea ports ...

"It was a disingenuous announcement. As many observers noted, the group appeared to simply hand out uniforms to their supporters at the port and claim that they were autonomous local security forces."

The Houthis then asked the UN to verify their “redeployment” of forces but the UN refused.

There was also a failed agreement in 2014 when the Houthis were supposed to start pulling back forces from their mountain strongholds. Salisbury writes:

"After signing the deal, the Houthis ignored the pullout requirement, arguing that the men at checkpoints on the streets were not their fighters but supportive citizens from autonomous 'popular committees'."

Hopefully the UN will be able to verify this latest pullout to the satisfaction of the government, but nobody will be very surprised if it doesn't. There's a huge amount of distrust to be overcome before much progress can be made and in any case de-militarising the Red Sea ports is only one tiny step towards ending a very complex and multi-faceted conflict.