Amid rapidly-growing numbers of new infections and the first two coronavirus-related deaths, Saudi Arabia is sealing off the cities of Riyadh, Mecca and Medina. From tomorrow, no one will be allowed to leave or enter.

Movement between the kingdom's 13 administrative regions will also be forbidden.

A night-time curfew is already in force and from tomorrow it will begin at 3pm rather than 7pm.

Iran reported 1,762 new cases and a further 122 deaths. For the time being at least, the daily number of deaths appears to have levelled off and the latest figure is the lowest for nine days.

However, the number of new cases – which last week appeared to have stabilised between 1,000 and 1,200 a day – has begun rising again.

The rise in new cases could be due to better detection through increased testing and implementation of the "national mobilisation plan" to combat the virus. On the other hand, it could be that a second wave is about to strike.

Elsewhere in the Middle East, 1,088 new cases have been confirmed since yesterday's update, bringing the cumulative total to 6,205.

Israel reported the largest number of new cases (374), followed by Saudi Arabia with 338. Israeli officials had been warning of large rises to come, because the amount of testing is being rapidly increased. Libya reported one coronavirus case – the first in the country.

In the Middle East outside Iran, 16 more deaths were reported, bringing the total to 92. Saudi Arabia reported its first two coronavirus-linked deaths. This is the current list: 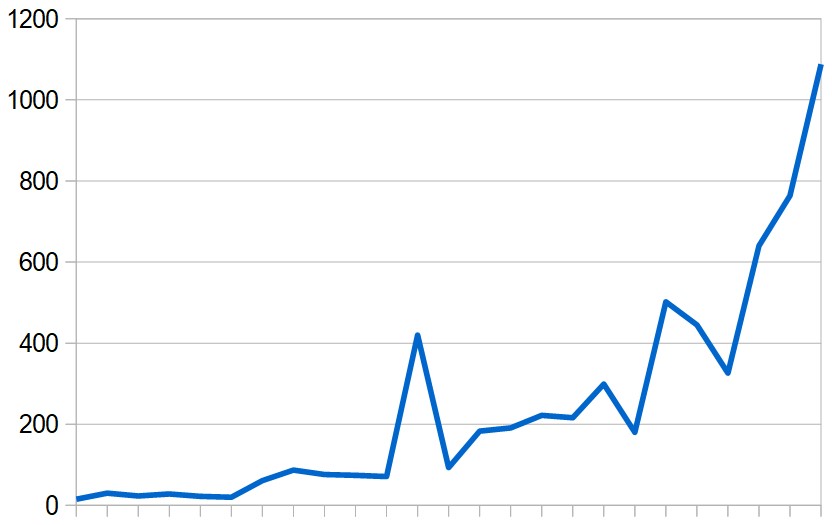 ● Algeria has reported substantial rises in new cases over each of the last four days, bringing the total to 264. However the relatively large death toll – 19 – is probably a sign that many more cases are going undetected (see yesterday's report on shortage of test kits).

● Bahrain: The central bank has ordered foreign exchange companies to sterilise banknotes. The instructions are to expose them to ultraviolet germicidal irradiation, high temperatures or isolate them for at least three days. Staff are also being told to wear protective gear when handling coins.

● Egypt: A night-time curfew is due to come into force at 7pm today (details here). Non-compliance is likely to be a problem. According to the WHO representative in Egypt, the country is at a crossroads "and failure to abide by the state’s instructions could lead to a scenario similar to Italy and Spain".

● Israel is introducing further regulations from this evening, and violators are to be punished with fines of 500 shekels ($137) or suspended jail sentences:

● Jordan: Having imposed a round-the-clock curfew on Saturday, the Jordanian authorities have decided to let some shops re-open. The curfew had been meeting some resistance – hundreds of violators were arrested, including four who reportedly attacked a water delivery truck.

The extremely ambitious initial plan was to deliver food and other essentials directly to people's homes but it ran into practical difficulties. Photos and videos posted on the internet showed people queueing in the streets to collect bread when they were supposed to be isolated indoors.

As a result of this, small shops are being allowed to re-open from 10am to 6pm but the prime minister has warned they will be shut down again if people don't observe the rules for social distancing.

The Guardian has a report by Michael Safi on life in Jordan under the curfew.

● Lebanon: Human Rights Watch has voiced concern about the ability of the country's medical services to cope:

"The country’s financial crisis has caused a dollar shortage that, since September, has restricted the ability of medical supply importers to import vital medical supplies, including masks, gloves, and other protective gear, as well as ventilators and spare parts.

"The government has also not reimbursed public and private hospitals for bills, including from the National Social Security Fund and military health funds. This has made it harder for them to purchase medical supplies, hire additional staff to reduce the burden on overworked nurses, and provide necessary protective gear."

Health ministry figures suggest at least half the people diagnosed with the virus have caught it from others inside the country. While 29% of Lebanon's cases are travel-related, 50% are the result of contact with a confirmed case. The origin of the remaining 21% of investions is unknown.

Earlier this week the ministry included positive test results from some private hospitals in its official figures. It says "some" of these have now been discounted as a result of further testing by accredited laboratories.

● Libya: The UN-backed Government of National Unity (GNA) reported the country's
first case – a 73-year-old man who arrived in Libya from Tunisia on March 5, having previously been in Saudi Arabia. He is now being treated in a hospital in Tripoli. The Associated Press reports:

"The confirmation of Libya's first case, three weeks after the patient's arrival in the country, poses a test for its fragile medical system. Attempts at a nationwide disease protection program have been undermined by the country's division between two rival governments, in the east and west of the country, and a patchwork of armed groups supporting either administration.

"Even on Tuesday, Tripoli's suburbs came under heavy fire as the United Nations appealed for a freeze in fighting so authorities could focus on preventing the spread of the coronavirus."

Both of the main warring factions have previously announced measures to reduce the spread of the virus.The GNA ordered the closure of restaurants and cafes and banned gatherings for parties, weddings and funerals. On Saturday it imposed a night-time curfew from 6pm to 6am. The Benghazi-based Libyan National Army imposed a similar curfew last Thursday in the areas under its control. However, according to the National Center for Disease Control, only 61 tests for the virus have so far been carried out.

● Qatar has arrested nine people for violating home quarantine. A further 14 – listed here – have been publicly named and shamed.

● UAE: Following social media pressure, the UAE says it will allow at least some types of internet voice and video (VoIP) calls. These have long been banned in the UAE and banned or restricted in several other Gulf states, apparently for commercial and security reasons. Lifting the ban will allow people to keep in touch more easily while in home isolation.