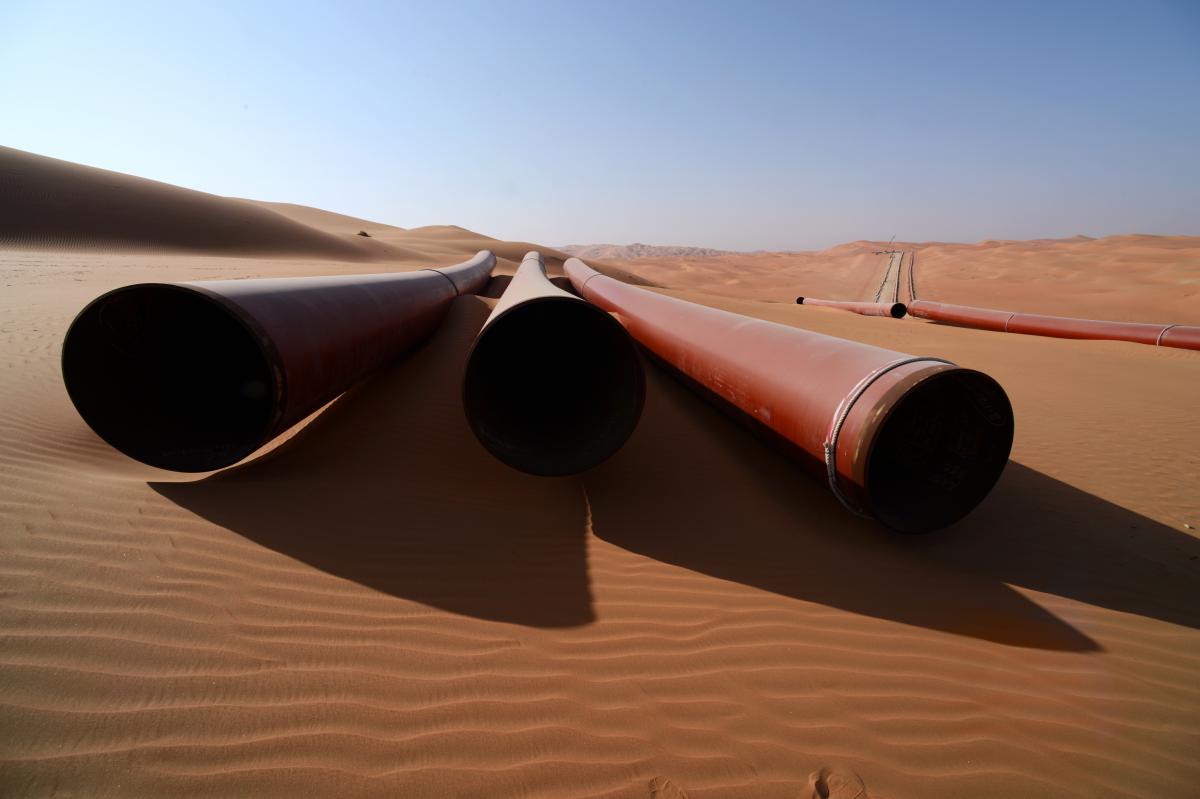 Leaked documents show that Saudi Arabia and the Organisation of Petroleum Exporting Countries (OPEC) have been lobbying to water down a crucial scientific report on climate change.

News of the lobbying comes just days before the start of the COP26 conference on international action to slow down global warming. Ahead of the conference, governments and others have submitted comments on a draft report by the IPCC, a UN scientific panel which recommends rapidly phasing out dependence on fossil fuels.

Major oil producers are among those seeking to weaken the report's conclusions, according to the documents.

A detailed account of the leaks can be found on the Unearthed website, an environmental journalism project funded by Greenpeace supporters.

Reproduced below are two sections from the Unearthed article that describe the lobbying efforts of Saudi Arabia and OPEC ...

Chief among those pushing back against the recommendation that fossil fuels be urgently phased out of the energy sector are Saudi Arabia and OPEC, which together produce around 40% of the world’s oil.

Saudi Arabia repeatedly seeks to have the report’s authors delete references to the need to phase out fossil fuels, as well as an IPCC conclusion that there is an “need for urgent and accelerated mitigation actions at all scales”.

In one comment, an advisor to Saudi Arabia’s Minister of Petroleum and Mineral Resources tells the authors to “omit” from the report a statement that the “focus of decarbonisation efforts in the energy systems sector needs to be on rapidly shifting to zero-carbon sources and actively phasing out all fossil fuels.” He claims that this sentence in the draft “undermines all carbon removals technologies such as CCU/CCS and limits the options for decision [sic] makers to carbon neutrality”.

Saudi Arabia even rejects the use of the word “transformation”, which the IPCC uses throughout the report to describe emissions reduction pathways that meet the goals of the Paris Agreement – the international treaty through which countries agreed to limit global warming to well below 2 degrees Celsius, and preferably to 1.5°C.

For instance, the IPCC states in its draft Summary for Policymakers that scenarios “that limit warming to 2°C and 1.5°C imply energy system transformations over the coming decades. These involve substantial reductions in fossil fuel use, major investments in low-carbon energy forms, switching to low-carbon energy carriers, and energy efficiency and conservation efforts.”

Instead Saudi Arabia argues that urgent action to tackle the climate crisis is not necessarily needed: “The use of ‘transformation’ should be avoided as it has policy implications by requiring immediate policy actions. Transitioning to low-carbon economies can be achieved through planned interventions and by considering various transitioning options.”

In another comment, the Kingdom’s ministry of petroleum advisor claims that “phrases like ‘the need for urgent and accelerated mitigation actions at all scales…’ should be eliminated from the report.”

Saudi Arabia’s preferred approach to tackling climate change involves relying on as-yet unproven technologies which could enable nations to continue burning fossil fuels by sucking the resulting emissions out of the atmosphere – a concept it packages as the “Circular Carbon Economy.”

In line with this strategy it complains that the IPCC does not give sufficient attention to the feasibility of direct air capture (DAC), a technology in the early stages of development that is intended to draw carbon dioxide out of the atmosphere to be stored or used in industrial processes.

Relying on the development of technologies like DAC and CCS would allow nations to emit more greenhouse gases now on the optimistic assumption that they could draw them out of the atmosphere later, opening up the possibility of bringing temperatures back to within the limits agreed in the Paris Accord.

In one comment, responding to a section of the IPCC report discussing the “accelerated decarbonisation of electricity through renewable energy”, Saudi Arabia complains that the IPCC is “excluding natural gas and clean fossil fuel technologies e.g. CCUS and DAC from the decarbonization electricity generation Net Zero models.”

The reviewer also complains that CCUS and DAC technologies are excluded from a list of lower carbon emissions fuels, which includes renewables, bioenergy and “non-fossil” fuels that will be necessary to accelerate climate change mitigation.

But according to Professor Robert Howarth of Cornell University, there is no scientific evidence that humanity can rely on carbon capture or direct air capture in this way.

“There’s no objective information out there which would suggest that this is a well proven, functioning, affordable technology,” he told Unearthed. “All the information is to the contrary.”

“Clearly if a nation has huge reserves of fossil fuels they may feel some national interest to protect that interest and try to encourage the world to use them. But that’s not in the global interest, you’d hope that countries would have a broader perspective than that.”

While the IPCC report does outline how direct air capture and CCS could play a role in the future, it also says there is uncertainty about the feasibility of these technologies.

Saudi Arabia takes issue with this, rejecting analysis that “CCS may be needed to mitigate emissions from the remaining fossil fuels that cannot be decarbonised, but the economic feasibility of deployment is not yet clear”.

The Saudi government reviewer writes: “The CCS technology is now [considered a] viable option and its feasibility should be considered by the authors in all the chapter[s].”

Discussing the risks posed by emissions reduction pathways involving technologies that are not yet fully developed, Siân Bradley of Chatham House told Unearthed: “over-reliance on CCS and negative emissions technologies, should they fail to materialize, would lock-in a high-emissions pathway with no obvious escape route. The risks here cannot be overstated.”

On transport, the Saudi reviewer also appears to suggest a continued role for petrol and diesel vehicles: “claiming that the electrification of transportation, hydrogen, and biofuel are the only way to decarbonize the sector while totally exclude [sic] the ICEs [internal combustion engines] from the scene. Other options should be included.”

The Organisation of the Petroleum Exporting Countries (OPEC) – which represents 13 major oil producing nations including Saudi Arabia – shares the Saudi enthusiasm for removing references to a fossil fuel phase-out from the report.

In the comments reviewed by Unearthed, it tells authors to delete the sentence “More efforts are required to actively phase out all fossil fuels in the energy sector, rather than relying on fuel switching alone”. OPEC claims this “is not a policy-neutral statement considering, for example, that technological advancement could play a key role” in cutting emissions.

Similarly, it asks authors to delete the conclusion: “If warming is to be restricted to 2°C, about 30% of oil, 50% of gas, and 80% of coal reserves will remain unburnable”.

Duncan McClaren, a Research Fellow at Lancaster Environment Centre, told Unearthed: “In resisting a rapid fossil fuel phase out in favour of such technologies of prevarication, these countries are effectively saying humanity can run down the remaining carbon budget more quickly. But this would leave us in a hugely difficult situation in the future, having to deliver on large amounts of carbon removal regardless of the costs and impacts involved.”

“Sadly, this sort of promise of a future technology actually works best for the fossil industry if in practice it’s too expensive to implement”, McClaren continued, “because they can go on making promises, but never actually have to spend money to do it.”

OPEC also asks the authors to strike out a number of references to fossil fuel lobbies impeding action on climate change including the sentence: “Several scholars have traced delay and sluggishness by states to pursue [ambitious] climate mitigation policies to the activities of powerful interest groups who have vested interest in maintaining the current high carbon economic structures”.

OPEC member Iran, meanwhile, separately comments that limiting global warming to 1.5°C is not possible and the world should aim for 2°C: “Given current trends and technologies, a continuous annual reduction in greenhouse emissions of more than 5% between 2021 and 2030 is highly unlikely. Even developed countries have not been able to continuously reduce emissions to this level yet. Therefore, it seems that the goal of limiting the temperature increase to 2 degrees should be pursued instead of the 1.5 degrees goal (as agreed in the Paris Agreement).”